Inspired by the true search-and-rescue case of an autistic boy who got lost in the Vermont wilderness, this mystery is a compelling roller coaster ride through the worst of winter―and human nature.

It’s October, hunting season in the Green Mountains―and the Vermont wilderness has never been more beautiful or more dangerous. Especially for ten-year-old Henry, who’s lost in the woods. Again. Only this time he sees something terrible. When a young woman is found shot through the heart with a fatal arrow, Mercy thinks that something is murder. But Henry, a math genius whose autism often silences him when he should speak up most, is not talking.

Now there’s a murderer hiding among the hunters in the forest―and Mercy and Elvis must team up with their crime-solving friends, game warden Troy Warner and search-and-rescue dog Susie Bear, to find the killer―before the killer finds Henry. When an early season blizzard hits the mountains, cutting them off from the rest of the world, the race is on to solve the crime, apprehend the murderer, and keep the boy safe until the snowplows get through. Blind Search reads like a treatise on how to craft a thriller bursting at the seams with converging subplots without ever moving us to throw up our hands in exasperation. Indeed, we’re too busy using our fingers to turn the pages.

An action-packed story of triumph over adversity.

Munier’s affection for the dogs she depicts, as well as Henry’s sweet bond with them, will warm hearts. Readers will look forward to the irresistible Mercy and Elvis’s next adventure.

The first in a gripping new series by Paula Munier, A Borrowing of Bones is full of complex twists, introducing a wonderful new voice for mystery readers and dog lovers.

After their last deployment, when she got shot, her fiancé Martinez got killed and his bomb-sniffing dog Elvis got depressed, soldier Mercy Carr and Elvis were both sent home, her late lover’s last words ringing in her ears: “Take care of my partner.”

Together the two former military police—one twenty-nine-year-old two-legged female with wounds deeper than skin and one handsome five-year-old four-legged Malinois with canine PTSD—march off their grief mile after mile in the beautiful remote Vermont wilderness. 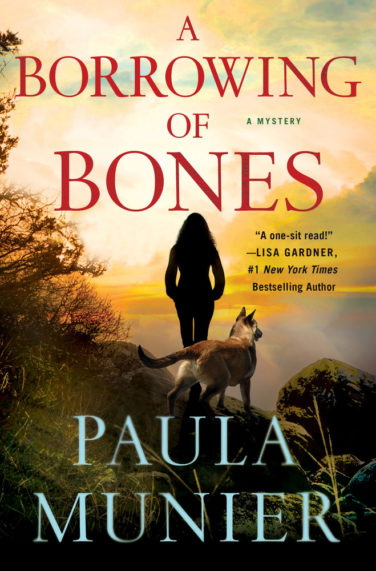 A compelling mix of hard edges and easy charm — I loved this book.

A nuanced nail-biter with a compelling quartet of crime fighters: two extraordinary rescue and rescued dogs and their human handlers. The best beginnings possess a magical quality that grabs readers from the first word and never lets them go. But beginnings aren’t just the door into a fictional world. They are the gateway to the realm of publishing—one that could shut as quickly as it opens. Happiness. Contentment. Peace of mind. These are the qualities of life that people long for today, even as they seem harder than ever to attain. A joyful, lovely book, Happier Every Day can be picked up as needed to help calm one’s heart, or read from front to back as one would a daily devotional. Emma Lambourne, born into a life of wealth and comfort, is shattered by her mother’s sudden death. Orphan at eighteen, she turns to her grandmother for solace, only to learn a shocking secret: Emma was adopted, and never a real Lambourne. Abandoned by the only family she’s ever known, Emma is alone without love.

Your first treat is a free Mercy and Elvis short story—available nowhere else. Then, about once a month I'll send exclusive updates, invitations, and more pack-only treats.